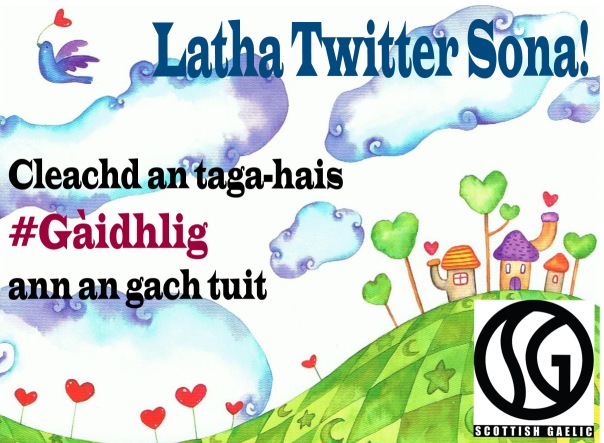 The fourth Là na #Gàidhlig (Gaelic Twitter Day) takes place this Thursday, 20th April 2017. The aim of the day is to involve as many people as possible to contribute to Social Media (e.g. Twitter, Facebook, etc) by using the #Gàidhlig hashtag to help create further awareness of the Scottish Gaelic language.

This year, we hope to beat last year’s results! Here are this year’s targets and the results to date: 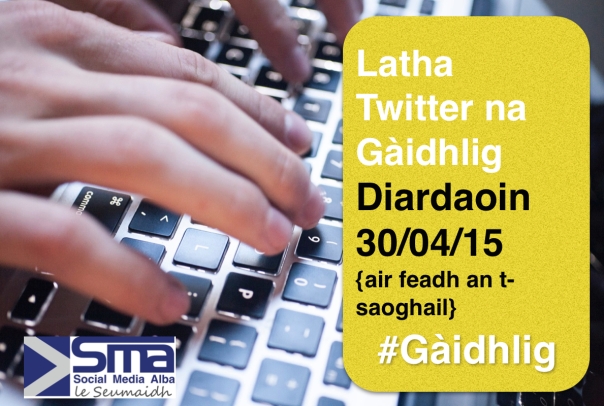 #Gàidhlig Twitter Day is only a week away! The main thing to remember is to use the #Gàidhlig hashtag when using Twitter, Instagram and Vine. The plan is for Twitter feeds to start buzzing across the globe on Thursday, 30th April 2015 – and we would like to be even more successful than our first Twitter Day last year where tweets were flying at a rate of 2.5 per minute reaching over four million timelines. We even have a central hub this year in Glasgow’s very own Gaelic community coffee shop near Sgoil Ghàidhlig Ghlaschu which will be open to everyone to come down, meet up together and get involved on the day.

Although Social Media Alba (Glasgow) facilitates Gaelic Twitter Day, the onus is on the general public to take the opportunities Twitter Day presents to shape it in their own way. The success of the day really does depend on people. This year we look forward to reading Tweets from people involved in business and enterprise, education and learning, the creative arts, politics and from all aspects of public life.

Launching in Australia, trending in the United States and handing over to Nova Scotia

Like last year, we are looking to our friends further afield. This year is no different! Mòd singer and Gaelic learner Dr Ronald McCoy (@drraghnall) and James Cameron (@jcam2812) of Comunn Gàidhlig Astràilia are hopefully helping out over in Australia to kick-off Twitter Day at just after midnight here in Scotland on 30th April. It is also looking like Outlander fever could cause Twitter tremors across the USA and we may even manage to break the Internet for a second time this year (#TheDress being the first time)! And just before the Tweets settle, we’ll hand over to our friends and stewards of Gaelic in Nova Scotia who will begin their annual Gaelic Month on May Day.

In a big change from last year, we have a central hub for Gaelic Twitter Day at Coffee and Craic, 74 Elderslie Street. The hub will be open from 9am to 5pm and many fun activities will take place over the course of the day – including Carina’s Pop-up comedy Couch (@Carinamac72 @CarinasCouch) where we hope a good number of local, national and international celebrities  join Carina on the couch for some Coffee, Craic and Selfies!

meetup.com: A new version of Glasgow’s Gaelic Meetup is back. The meetup group is the ideal place for organisations to promote their workshops, training and classes and take payments for ticketed social events. To sign up for free visit: http://www.meetup.com/scottish-gaelic/

Gillebrìde, the Coffee and Craic mascot Harris Tweed dog, has gone walkies and has ended up in Edinburgh. We hear he’s somewhere on the Royal Mile. We’ll be releasing clues on the day for our friends in the East to see if they can find him. There will be prizes for the best photos taken connected to Gaelic language and culture!

Opportunities online to learn and use the language

Businesses that we know are contributing to the Day are @SocialMediaAlba, @CoffeeAndCraic, @Gaeliconsultant, @illustrationetc, @CarinasCouch, @TheTeaJenny and Edinburgh-based @CranachanCrowd. Scotland’s Council for Voluntary Organisations are hopefully going to Tweet from @SCVOTweet which should create additional awareness of Gaelic to volunteers. We hope many other Social Enterprises, freelancers and independent companies and Third Sector organisations will get involved on the day. Social Media Alba (Glasgow) is offering support to businesses new to the Gaelic language to help them get involved. All they have to do is send a Tweet or Direct Message to @SocialMediaAlba with their request.

Last year there was a lot of support for the first Gaelic Twitter Day by public organisations, and we’re hoping to see more of the same this year:

Last year gave us our benchmark – and it is going to be a tough one to beat! Our aims include having more than 3069 tweets by more than 1084 contributors creating and sending a Tweet using  the #Gàidhlig hashag. We’d also like to reach more that 1.7m Twitter accounts and 4.3m Twitter timelines.

As you can see, there’s a lot going on. One thing that is for sure is that we will have fun trying to beat last year’s success! 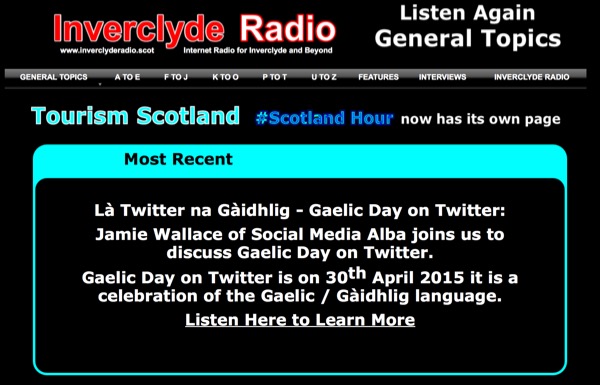 Gaelic Twitter Day 2015 (Latha Twitter na Gàidhlig) was one of the subjects of Inverclyde Radio’s #GoodAfternoonLive. Seumaidh was interviewed by David Faller for the live interview at 2pm on Friday 13th March.

However, while David was taking the interview in the radio station, Seumaidh was on the other end of the phone basking in the Mallaig sun and looking over to the Small Isles of Eigg and Rùm. Despite a slight technical hitch (well, it was Friday the 13th), the interview went well.

The conversation covered a few few topics including our desire to see more private enterprise participate in the day and also gave the opinion that in the 21st century, Social Media could be a gateway into the lives of today’s youth who are so technologically savvy as well as, with the right educational approach, act as a bridge for both the younger and older generations.

The interview is being repeated again on Saturday 14th March at 11.40am and will be added to Listen Again on Monday.

Gaelic Twitter Day takes place on 30th April 2015. To take part follow the #Gàidhlig hashtag then Tweet, and Retweet all day long! There are some tips and phrases you can use on the day too. If you’ve never used Twitter before, see our How to section for a step by step guide. 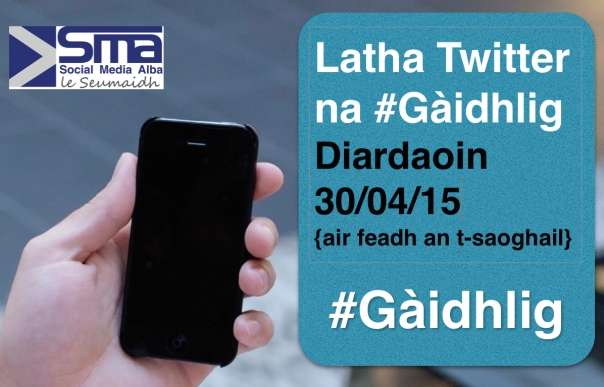 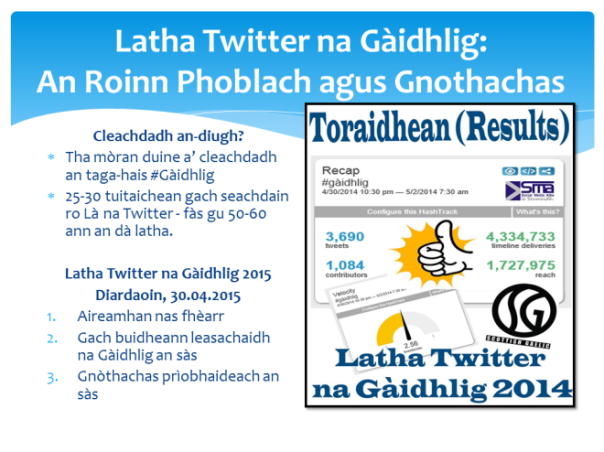 Do you know yet how you’re going to mark the Day? Have you spoken with your colleagues, friends and family yet?

Last year, it was great to see so many public bodies taking part in the Day. We really hope they’ll be involved again this year too.

Since the last Twitter Day, we’ve witnessed an increase in the use of the #Gàidhlig hashtag.

This year we would really like to see more private companies take part. This will prove to be a challenge, however we are hopeful!

Wouldn’t it be great to improve on last year’s performance?

Take advantage of this opportunity, help to promote the Gaelic language and help us spread the #Gàidhlig word.

Listen out for the live interview about Gaelic Twitter Day 2015 between Seumaidh and David Faller on Radio Inverclyde, Friday afternoon at 2.00pm.

Our services can help you make the most of Gaelic Twitter Day.

Contact us today to see how we can help your organisation.

This Gaelic Twitter Day: Be seen. Be heard. Go global.

Take part! Register yourself, your business or organisation today.

Need some help to introduce some Gaelic to your organisation?

Get in touch to find out about our support services. 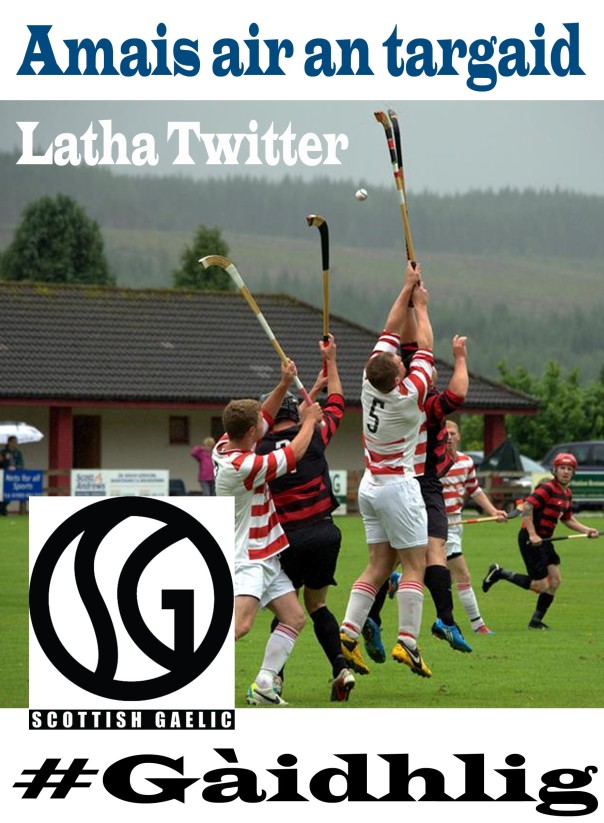 With only three days to go, this Thursday is Gaelic Twitter Day, join us and help to get #Gàidhlig trending!